Why you need to “Think Like A Monk” – Jay Shetty 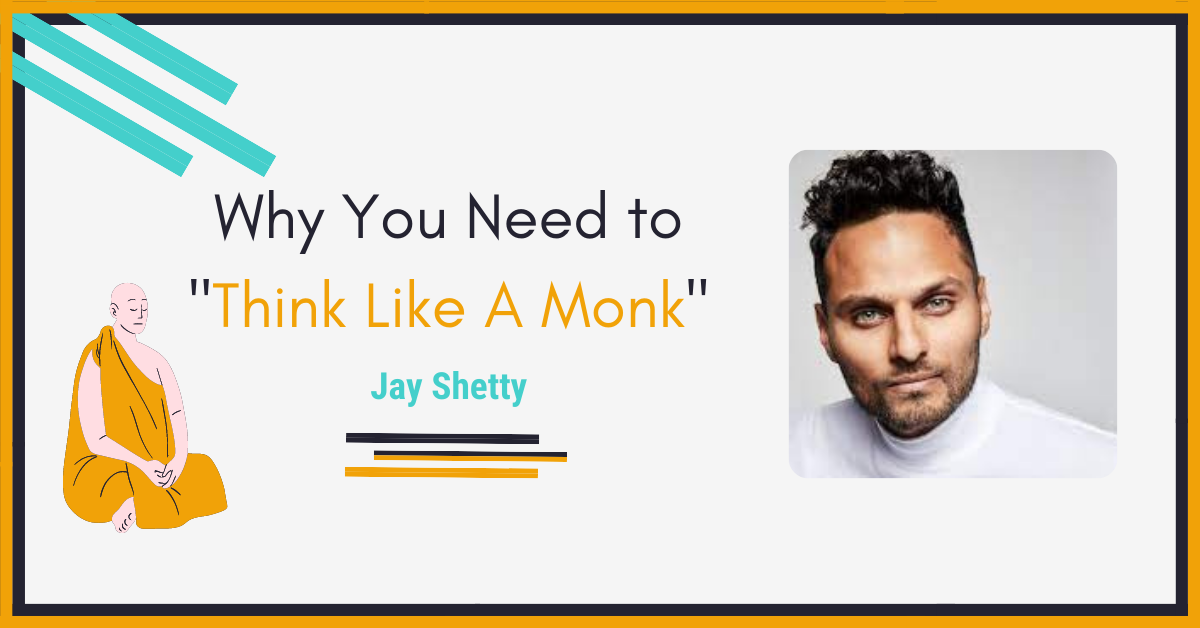 The brilliant quote from “As a Man Thinketh” by James Allen speaks so much about the importance of mindset in everyday life. It goes something like this:

“As a man thinketh in his heart, so shall he be”

I personally am a huge advocate for having a robust, trouble-free mindset. I believe it holds the keys to all doors. It’s the single deciding factor between success and failure. There have been countless books and numerous speeches in which mindset has been a focal point. I recently read Think Like A Monk by Jay Shetty – a book that goes beyond the normal growth mindset we’ve all come to be accustomed to.

From Paulo Coelho’s “Alchemist” to Stephen Covey’s “7 Habits of Highly Effective People” to Joseph Murphy’s “Power of the Subconscious Mind”, all these books have one constant between them –  the power of the human mind.

Think like a Monk by Jay Shetty is the latest entrant to this lineup. Focusing on how to attain the monk mindset, what made the book stand out for me was the almost casual style of tone that Jay took. I felt as if a friend was explaining these things to me.

Jay’s ability to utilize real-world scenarios and anecdotes that we can all relate with is what attracted me toward completing the book. I had always liked Jay from his old videos in which he used to combine his personal experiences with real-life examples to share interesting yet powerful stories. This book made me respect him from a very different point of view.

How crucial is Mindset in excelling at Life?

Our attitudes, beliefs, values take shape all from the mind. If we think negatively, that negative energy will flow into daily life in the form of irritation, frustration, and anger. On the flip side, thinking positively emits positive radiance in the form of composure, satisfaction, and happiness.

According to Very Well Mind, people with a positive mindset view situations differently than their counterparts.

How we view a certain situation influences the outcome a lot more than what we think. Approaching an obstacle with a growth mindset will force you to learn it even if you had never done it before.

Telling yourself this is not in your paycheck will result in sub-par results and leave a bad impression on your boss or client.

“ The moment we believe that success is determined by an ingrained level of ability, we will brittle in the face of adversity”.

Our brains are made of plastic – hence they’re Neuroplastic

Did that make you sigh? No-pun-intended!

Neuroplasticity is a fun concept really. The Physiopedia defines it as the “ability of the nervous system to change its activity in response to intrinsic or extrinsic stimuli by reorganizing its structure, functions, or connections.

If that’s a mouthful for you, what that means is that the nervous system has that uncanny ability to modify itself in response to external or internal signals. Like a baby learns to walk and then control or a blind person learns to use his stick as a walking mechanism, the neuroplasticity of the nervous system is what allows them to accomplish such a feat.

Research in neuroscience has claimed that the brain continues to evolve even when we become adults. To all the nay-sayers who think the brain becomes weak after age 24, it’s the exact opposite. All you need to do is have the right mindset and make changes to your lifestyle, and the plasticity of your brain will do the rest.

Now! Before you back out from the website, I’d like to invite you to join the PlayTru Newsletter where I break down topics such as these (and MUCH MORE!) in easy, actionable steps.

Next Monday, I will start breaking down the gist of “Think Like A Monk” by focusing on individual chapters and what I learned from them, and what You can learn from them. Godspeed!